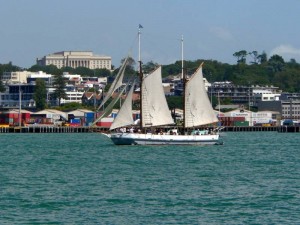 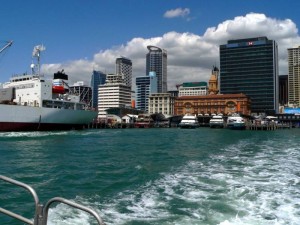 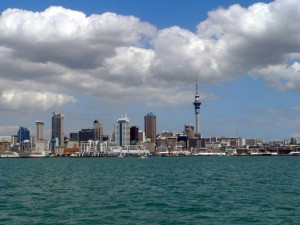 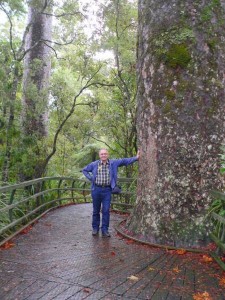 ITINERARY:
On Feb 25 in the afternoon I drive in rented car from Vista to Los Angeles airport. In the evening I board a Qantas plane for Auckland, NEW ZEALAND. I land there in the early hours Feb 27. I am taken to my hotel. Today there is a sightseeing trip of the city arranged by Vantage Company for all who take the cruise. The following 2 days I see Auckland by myself visiting the 328 m high Sky Tower, take a tourist bus and a boat ride through the harbor. On Mar 1 we visit the Museum and in the afternoon we board the Holland America ship Statendam. The ship leaves Auckland in the evening.
During next 2 days the ship stops in Tauranga and Bay of Islands still in New Zealand. That is followed by 2 full days on the Pacific Ocean before we dock at the town of Noumea on the island of NEW CALEDONIA which is a French possession. In the morning I walk the city on foot and in the afternoon there is a bus tour of the island.
Read more

Next 2 days the ship sails on the Coral Sea and on Mar 9 we dock in Honiera on the Guadalcanal Island in SOLOMON ISLANDS. During the trip through the island we visit Bloody Ridge and the airport Henderson Field both famous from the battles between Americans and Japanese in WWII.
After another day on the sea Statendam moors at Rabaul on the Island of New Britten of PAPUA NEW GUINEA (PNG) on Mar 11. This is my second visit of this place. During the trip through the island we visit a WWII cemetery where some 1000 Allied soldiers are interred. We also see Japanese fortifications, WWII museum and the town Rabaul. One of the local volcanoes is spilling smoke and volcanic dust. Soon our ship is covered by few inches of this stuff.
Three days on the Pacific Ocean and then landing on the Yap Island which is part of a country called FEDERATED STATES of MICRONESIA (FSM) . I explore its town Colonia on foot. A specialty of this island are so call “stone money.” They look like large mill stones. They are leaning against the walls of a hotel. Each has certain value and belongs to various people on the island.
Another day on the ocean and the next stop is island of GUAM on Mar 17. I have visited Guam before so I do the sightseeing by myself. The following day we dock at the Saipan Island in the NORTHERN MARIANA ISLAND group. There I take a bus tour which shows us among other where the American soldiers stormed the beaches in WWII.
After another day on the ocean Statendam anchors at Iwo Jima on Mar 20. Since Solomon Islands we have been visiting the battlegrounds of WWII. There is a number of participants of those battles on board. At Iwo Jima is a ceremony of remembrance.
Two days later on Mar 22 we are at city of Naha on Okinawa, JAPAN. Here I take part in a bus tour. The following day we sail past many Japanese islands and on Mar 24 we reach Nagasaki on island of Kyushu. There is also a bus tour. Another day among the Japanese islands and on Mar 26 our ship docks in Osaka. From there by bus past Kobe to Kyoto. Next 2 days I am sightseeing the historical city by bus and also on foot.
On Mar 29 I leave Japan from Kansai Airport in Osaka for San Francisco. From there by another plane to Los Angeles. Here I take a car from AVIS and drive home to Vista.

DU-16 Down Under (Australia, Indonesia and New Zealand)
Date of travel: Oct 14 – Dec 5, 2016 (total 53 days)
Australia Cruise – last position
ITINERARY:
Late in the afternoon on October 14, 2016 I drive in a rented car from Vista to Los Angeles airport. Qantas plane Boeing 747-400 takes off before midnight. After 13 hours early in the morning it lands in Brisbane, Queensland, Australia on October 16, thanks to the 180th meridian. Later that morning another flight to Alice Springs in Northern Territory of Australia. Here I spent 3 days getting familiar with the town in the center of Australia, where I spent some time in 1988. Then on October 18 short flight to Sydney, NSW for 2.5 days on my own.
At noon on October 20 in Sydney I boarded the Holland America ship Maasdam (almost 56k gross tons, over 1100 passengers and some 600 crews) for a 43 day cruise circumnavigating Australia and visiting the islands of New Zealand from the Milford Sound in the southwest, the major places of the east coast, to Auckland in the north.
Sailing counterclockwise the Australian continent with some days just cruising, we visited Brisbane, Hamilton Island and Cairns in Queensland, Darwin in Northern Territory, Komodo and Bali islands in Indonesia., Geraldton, Fremantle, Perth and Albany in Western Australia and Adelaide in South Australia. Due to high waves we could not visit the Kangaroo Island. Then Burnie in Tasmania. Tasmania is the only island state of Australia. Melbourne in State of Victoria followed and on November 18, after 29 days of sailing we were back to Sydney, NSW.
Read more
The second part of our cruise started with evening departure from Sydney on November 18, stopping south of Sydney in Eden, NSW and after spending a day on the sea we visited Hobart in the southern tip of Tasmania. Then 2 days across the Tasman Sea to New Zealand and the Milford Sound. A day later we were sightseeing Dunedin on the southern coast of the South Island. So far so good. After that we accounted a storm raising waves to 10 and 13 ft (3 to 4 m) and the ship could not land in harbors of Akaroa (for Christchurch) and Picton both on the South Island of New Zealand. We took an aim to Napier on the North Island. But we were not allowed to land there. So after 2 days on the rough sea (South Pacific Ocean), when the storm subsided, we landed in Wellington, the capital of New Zealand. We saw this beautiful city under the sunny skies. From there we sailed to Napier and day later to Tauranga, from there I made a bus trip to Rotorua in the heart of the North Island. After another day on sea and 14 days of sailing from Sydney we ended our cruise in Auckland early in the morning on December 2.
I spent another 3 days in Auckland sightseeing this very appealing city. On December 5 I shared a taxi with friends I made on the ship to get to the airport. A Boeing 787-9 took off in the mid afternoon and after 12
hours of flight brought the full plane to Los Angeles before 7 AM the same day (again due to the Date Line). I picked up the prearranged car at Hertz and drove home to Vista where after 11 AM.

Travel office: Though I found the cruise on Internet, I let Spiekermann Travel Service to do the arranging.
Who took part: I joined the cruise as an individual with other more than 1000 passengers.