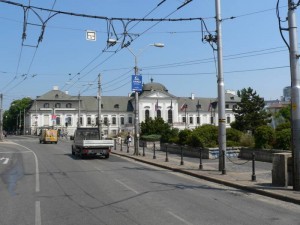 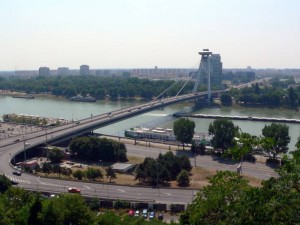 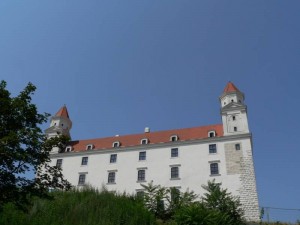 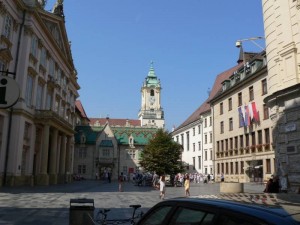 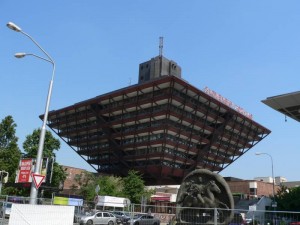 Travel office: no travel office used.
Who took part: I traveled with my parents

ITINERARY:
On July 23 Aramis and I left Chrudim, now in the CZECH REPUBLIC, on bicycles going east to town of Blansko, where we picked up our friend Athos. We slept under a tent near the cave called Macocha. Next day, after sightseeing Macocha, we rode to town Buchlovice, took a tour of its palace there and slept in the woods near Buchlov Castle. The following day we rode to a spa town Luhacovice, where we met (by chance) one our teacher. In the afternoon we continued riding our bicycles through Vizovicke Mountains to the Slovak border, where we spent a night under the tent again.

On July 27 we crossed the border to SLOVAKIA and rode to town Puchov. Here we turned south along the River Vah and ended in Trencin. We put a tent outside the town among the fields. The following day we continued south and later climbed to the ruins of Cachtice Castle, where we pitched our tent in pouring rain. Next morning we visited a castle museum in the village of the same name. Then we continued south to a spa town called Pistany and later drove to the vicinity of a bigger town Trnava. Following morning, being exhausted bicycling, we hail a truck which took us to Slovak capital Bratislava. Not feeling well, I spent the afternoon at a tourist spot at a river near the city, while my friends went to Bratislava for sightseeing. That cured me and the next day we rode our bicycles from Bratislava to the north.
Read more

So that same day, July 31, we crossed the border back to what is the CZECH REPUBLIC now. We built our ten at some lakes near the Lednice Palace. At night we were a target of many mosquitoes. The morning after we took a tour of Lednice Palace and rode to Kninicska Dam near Brno. After a night in the woods we said Good Bye to Athos, who went home to Blansko, while Aramis and I continued riding our bicycles for another two days. We stopped at Perstejn Castle and through small towns Policka and Skutec we returned to Chrudim on Aug 3.

Travel office: No travel office needed. All nights were under our tent.

Who took part: My friends from the trade school in Tesla Pardubice, Aramis and Athos and I.

ITINERARY:
On July 26 Aramis and I took an overnight train from Chrudim via Pardubice to Poprad in SLOVAKIA where early in the morning. We continue to Tatranska Lomnice. From here at noon we took a cable car to Lomnicke Pleso (a lake) in the High Tatras. Later on the same day we take another cable car to a mountain called Lomnicky Stit (2,634 m). We sleep a dormitory stile in a chalet at Lomnicke Pleso. Next day we leave for a places called Hrebenok (a village), Zbojnicka Chata (a chalet), Prelom (a mountain ridge), Polsky Hreben (another ridge), Slovansky Dom (a hotel), but we sleep under a tent in a camp near the town Smokovec. The following day we retuned to the Slovansky Dom and from there we took a mountainous path called Magistrala past the Batizovske Pleso and on path called Osterva down to Popradske Pleso. There we rented a tent for a night in a camp. The day after we climbed a mountain called Rysy (2,500 m). Then back to Popradske Pleso and still lower to Strbske Pleso. We rented a BB in a town of Strba. Here we are finished with the High Tatra Mountains.

After a good night sleep in Strba we take a local transportation to the town Liptovsky Mikulas in the valley between High and Low Tatra Mountains. We visit a museum there. The same day we reach a chalet under the highest mountain of Low Tatras, Chopok (2,024 m). Next day we take a cable car to the top of Chopok. After we are back down we take a bus to Demenovska Cave to see its stalagmites and stalactites.
Read more

Then we get back to the main train line. From the town Kralovany we take a train on a side track to Orava Dam. We sleep in a camp with tents. The following day we take a boat around the lake. Then back by train to Kralovany on the main track. On it we catch an overnight train west to Pardubice and then another to Chrudim where we are in the morning on Aug 3.

Travel office: No travel office needed. We bought the train tickets as we traveled and slept in chalets and camps.

Who took part: I traveled with my childhood friend Aramis.

ITENIRARY:
On July 23, 2015 I was in the Czech Republic and took a ride with my sister and her husband by car from Chrudim to Zlechov at Uherske Hradiste in Moravia (an eastern part of the Czech Republic). On July 24 I took an early train from there across the SLOVAK border to its capital Bratislava. At very hot weather I took two sightseeing trips through the city in an antique car and found Bratislava a very appealing place worth visiting. In the evening I boarded a train and with a change of the trains in Pardubice I returned back to Chrudim the same day.

Travel office: No travel office was used. I bought the train tickets at the railway station and got all information from a guide book of Bratislava and an information office in the city.
Who took part: I traveled alone.

ITINERARY:
At noon on Apr 27, 2019 I took a train from Prague, Czech Republic for three-hour ride to Bratislava, SLOVAKIA. I was taken by a member of Best Slovakia Tours to my hotel. Next day I have a sightseeing tour of Bratislava, the capital of the country. The following day there is a trip by car with a driver/guide to the monastery Esztergom in HUNGARY.
On Apr 30 I started the Slovakia tour in a car with a driver/guide on earnest. I left Bratislava for a week to see the historical places Banska Stavnica, Zvolen, Banska Bystrica, Lavoca, Spissky Castle, Kosice, Presov, Bardejov, rafting on Dunajec River, High Tatra Mountains with a daytrip to Zakopane in POLAND (Tatra Mountains), Kezmarok, Bojnice Castle and back to Bratislava.
On May 8 I take a noon train back to Prague.

Travel office: Best Slovakia Tours
Who took part: I traveled by myself in a car with a driver/guide.