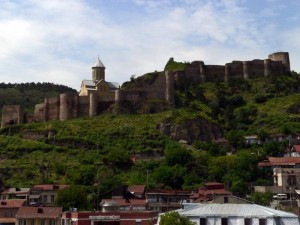 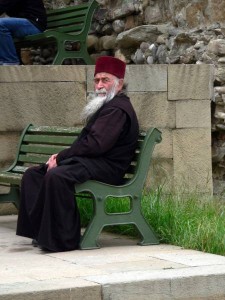 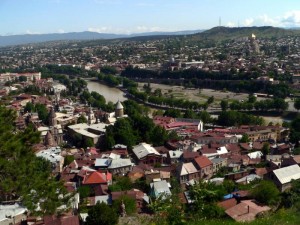 ITINERARY:
Late in the afternoon on May 9 I am taking a Lufthansa plane from Prague via Munich, Germany to Yerevan in ARMENIA, where very early on May 10. Sightseeing tour of Yerevan (capital of Armenia) is in the afternoon. First stop is under the statue of Mother Armenia in the Victory Park above the city. Then we see the Matenadaran Museum with old manuscripts followed by a History Museum and a carpet and jewelry exhibition. Next day is a visit to the Armenian Genocide Memorial commemorating killing of 1.5 million Armenians by Turks between 1915 and 1922. After that we drive out of Yerevan to Etchmiadzin, which is the seat of Catholicos (patriarchy) of the Armenian Christian Church. We visit the Cathedral and a museum. Following day we have a trip to the mountains northwest of Yerevan visiting villages, towns and ruins of a fort.
Read more

On May 13 we drive in southeastern direction and visit the Khor Virap and the Noravank Monasteries and taste local wines, then north through Selim Pass (2410 m above the sea level) and to Lake Sevan. Then we return to Yerevan. Next day a trip directly east to Garni. From the highway there is a beautiful view of Mount Ararat (5165 m) directly south in Turkey. In Garni there is a temple from before Christianity and the Geghard Monastery. Back in Yerevan a visit to a cognac factory. On May 15 we are leaving Yerevan. We stop again at Lake Sevan at place called Sevanavak with 3 old churches. From the lake we continue northwest through the town Dilijan and soon we stop at the Goshavank Monastery to see it. Later in the afternoon we come to Dzoraget and are overnight in a hotel there. Here I trip at the stair case and brake again my left arm. Following morning I get first aid in a local hospital. Then there is a stop at the busts of Mikoyan brothers (one constructed the plane Mig and the other was a politician) followed by a visits of the Sanahin and Haghpat Monasteries.

In the afternoon of May 16 we cross the border to GEORGIA and after an hour we are in its capital Tbilisi. Next day we admire the city from the hills above the valley in which it is located. Pictures are taken of the gigantic statue of Mother Georgia. Then going past the Narikala Fortress which dominates the city skyline down to Tbilisi sulphur bath. By our van to the equestrian statue of king Georgasali and Metechi Church. After lunch a walk through the old town and a visit to a museum. On May 18 trip southwest of Tbilisi to a town Dmanisi above which is a church and ruins of a citadel from 6th century. Near the church is a place where 1.8 million years old “Homo Georgicus” was discovered. Later a visit to a church from 7th century in a village of Bolnisi.

On May 19 we drive on the “Military Highway” north of Tbilisi visiting Ananuri Fortress, followed by Dzalisi with excavation from the Bronze Age, a citadel at Muchrany and 2500 years old bath at Armazi. Later to Mtskheta which is the center of religious activity and it was one time also a political capital. Starting with the largest church in Georgia, the Sveti-Tskhoveli Cathedral, then the Samtavro Necropolis and the holiest of holy Jvari Church perched on the hill above the valley founded in the 6th century. The last full day in Georgia we drive east of Tbilisi to area called Kakheti. Here wine is grown. We visit towns Telavi and Alaverdi a taste local wines.

We leave Tbilisi on May 21 and in mid afternoon we enter AZERBAIJAN at its northwestern corner. With a new guide and in a different van we leave the border and in less then 3 hours we come to the town Sheki, where overnight. In the morning there is sightseeing of the town with its fortress, a couple of museums and a market in an old caravanserai. We leave Sheki before noon. Later we see ruins of a Shah palace above the town Samaxi. We reach Baku, the capital of Azerbaijan, in the evening.

On May 23 early in the morning we leave for NAKHCHIVAN by plane. Nakhchivan is a detached part of Azerbaijan. There is Armenia in between. Azerbaijan and Armenia are in a war with each other, though there is no shooting at this time. The only connection is by planes. The flight from Baku to Nakhchivan City lasts less than an hour. We have a local guide there. There is a sightseeing tour of Nakhchivan. First stop is at a monument from the 12th century, second at Khanat House and Araz River. Then a tomb of Josif from 1162 and another one of Noah (of Noah Ark). After lunch a Historical Museum. Later on we visit a salt mine used for treating lung problems. The following morning a visit to Keaf Sureci. It is a place for picnicking. From here to Dari Dag on the border with Iran. There is a sanatorium there treating various ailments with mineral baths. Back in the city a stop at memorial of wars between Azerbaijan and Armenia. They happened on and off for some 100 years and they were fought even during the Soviet era. The last is a house and a mausoleum of H. Cavid, whom Stalin sent to Siberia where he died. Late in the evening we fly back to Baku.

On May 25 back in AZERBAIJAN proper we go on a sightseeing tour. First we walk past Martyr’s Lane with graves of fallen in the last war with Armenians. Then a panorama of the city around the bay opens before us. After that we drive 60 km southwest along the Caspian Sea to Qobustan to see petroglyphs from the Stone Age. When back in Baku we walk through streets of the old town and enter the complex of the Shirvan Shahs Palace. Next day outside Baku a visit to the Fire Mountain, where natural gas percolates from ground and is burned off, then a Mardakan Fort and Zoroastrian Ateshgan Fire Temple.

On May 27 we are getting up at 1 AM and are leaving Baku by plane at 4 AM. I am flying to Frankfurt, Germany and from there to Prague, Czech Republic, where at 9:15 local time. Few days later my left arm is operated on in the Motol Hospital in Prague.

Who took part: In Armenia and Georgia there were 4 travelers. In Azerbaijan there were only 3 travelers. There was a local guide in each visited country and in Nakhchivan. Travel was in vans.