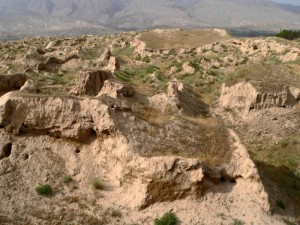 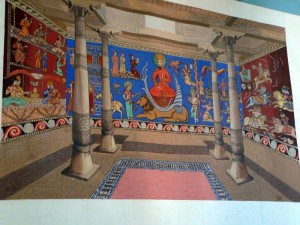 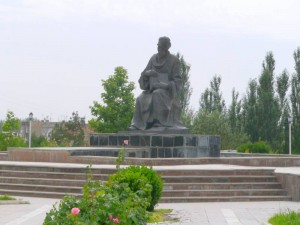 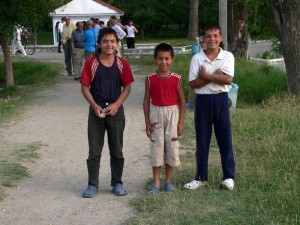 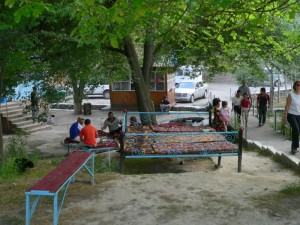 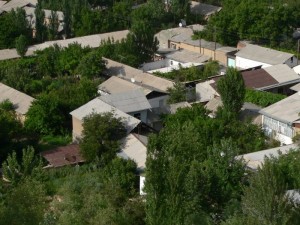 ST-07 STANS trip – Turkmenistan, Uzbekistan, Tajikistan and Kyrgyzstan with a stop at Istanbul, Turkey
Date of travel: May 29 – Jun 23, 2007

ITINERARY:
On May 29 at 4 AM I am leaving Vista in a rented car for the 100 miles (160 km) distant Los Angeles airport. From there at 8 AM on a plane to New York, where at 4:30 PM. Here I meet several fellow travelers. In the evening our plane depart for Istanbul in TURKEY. On May 30 at noon Turkey time we are there. We spend the afternoon in a hotel or walking through the city. The rest of our group joins us here. Late in the evening we board a plane for Turkmenistan.

On May 31 at 2:30 AM we land in Ashkhabad, TURKMENISTAN. Between California and Turkmenistan times there is just 12 hours, so I am on the other side of the globe. On June 1 we leave Ashkhabad for 2 day trip to a city of Mary. We drive through Karakum Desert (it means “black sand”) and visit excavations of Anau and Abiwerd. We see the archeological museum in Mary and we are overnight there. The following day we explore the excavations of Merv, which is the main attraction of Turkmenistan. It was an important city on the Silk Road until it was sacked and all its people killed by Mongols in 1221. Then we return to Ashkhabad. The following morning we have sightseeing of Ashkhabad including its large bazaar. The city has many monuments to its life long president Niyazov, who died recently. Most of them are his bigger than life gold covered statues and many are in form of modern building he ordered to built. In the afternoon we drive to excavations of Nissa in foothills of Kopet Dag Mountains, which makes the border with Iran here. Next day we fly to the northern part of the country and explore excavations of Konye-Urgenc, which was the capital of ancient Khorezm.
Read more

From here only 30 minute drive brings us to the border with UZBEKISTAN. Our first city in Uzbekistan je Nukus. We sleep in yurts in the desert. Next morning a visit to a fortress Ayes Kala followed by drive to World Heritage Site Khiva with two days of its sightseeing. It is a beautiful city and must see when visiting Uzbekistan. On June 7 we continue through the Kyzylkum Desert (means “red sand”) to another gem city, Bukhara. We devote two days to its sightseeing. All the historical buildings are repaired, but almost devoid of people now, so I miss the live pouring through the streets of old Bukhara in 1965 when I was here the first time. On June 10 we drive to Shakhrisabz that Tamerlane made his seat, because he was born in its vicinity. At present Tamerlane is very popular historical figure in Uzbekistan and a his large statue decorates the center of the town. Newlyweds take their pictures under his statue. In mid afternoon we continue to Samarkand, another jewel in the crown of Uzbekistan. In 14 and 15 century it was the capital of Tamerlane’s Empire. Next morning we explore Samarkand and visit its major monuments like Gur Emir (a tomb of Tamerlane), Registan (a square with beautiful ancient buildings) and Bibi-Khanym Mosque (in 1965 it was in a pitiful shape, while now it is as new).

Later in the afternoon a drive to nearby TAJIKISTAN and its town of Penjikent with a pretty good museum. Then we see the excavations of ancient Penjikent founded in 4 century BC and remains of a Zoroastrian temple. After spending about 3 hours in Tajikistan we return back to Uzbekistan. Never mind the short time in Tajikistan, I had spent in this country much longer time in 1965.

Back in Samarkand we continue its sightseeing. Today it is Shakh-i-Zinda (gigantic necropolis). It is the largest collection of mausoleums I have ever seen. Another stop is at the Ulukhbek Observatory. After 500 years there is only part of the sextant left. Then we see excavations of the city Afrasiyab which predates Samarkand. On June 13 we move on our bus to Tashkent, the capital of Uzbekistan. The sightseeing tour of the city is in the afternoon.

On June 14, while part of our group flies to Kyrgyzstan, another part flies back home. Among this homebound people is the owner of Spiekermann Travel Service, Ihab Zaki, who joined us in Khiva.

We reach Bishkek the capital of KYRGYZSTAN in the morning. It was called Frunze during the Soviet era. We explore the city the first afternoon. The following day there is a daytrip to the mountains of Ala-Archa Nat.Park with alpine countryside. On June 16 we leave Bishkek and drive east along the northern shore of a large Issyk-Kul Lake. With several interesting stops we come to the city of Karakul by night. As in number of Kyrgyz towns there is a statue of Lenin here. The following morning we visit the major places of Karakul (an animal market, a Chinese mosque and an Orthodox church). In the afternoon we see the Przewalski Museum outside the city. Next day a daytrip south of Karakul into the Altyn Arashan Valley surrounded by snow capped peaks. On June 19 we leave Karakul for a Shangri-la like Djety Orguz Valley, where we sleep in yurts again. At night there is an unobstructed view of the stars on the skies. The Milky Way really reminds me a white curtain lying across the heavens. Then we continue in our vans west along the southern shore of Issyk-Kul. Our hotel is in a town Tamga. Afternoon is spent at the lake in which some of us take a dip. The following day we drive past the western tip of Issyk-Kul Lake and return to Bishkek.

All four countries of our present trip are very clen. What a difference from some other recently visited countries.

Very early on June 22 our group flies from Bishkek via Istanbul home to USA. I change a plane in New York for one going to Los Angeles. From there in a rented car to Vista, where at 3 AM on June 23.

Travel office: Spiekermann Travel Service – its office is in Detroit, USA
Who took part: From Istanbul in Turkey to Tashkent in Uzbekistan there are 16 of us plus Ihab Zaki between Khiva and Tashkent. However, for Kyrgyzstan the group is reduced only to 9 travelers. In every country we have a local English speaking guide.